This is the place to discuss, or get help with any of your Type 4 questions.
Post Reply
569 posts

My naw is Mike, I’m a 41 year old product manager at a software company. I’m building the car I should have done when I was 16. I always passed a slammed Fasty (that probably never ran) parked in an apartment complex on the other side of town. VW Blue, early bumpers... but I went a different route and owned about 25 water cooled VWs over the years, mostly GTIs of 5 generations, a couple jettas, cabriolet, 2 passats, a 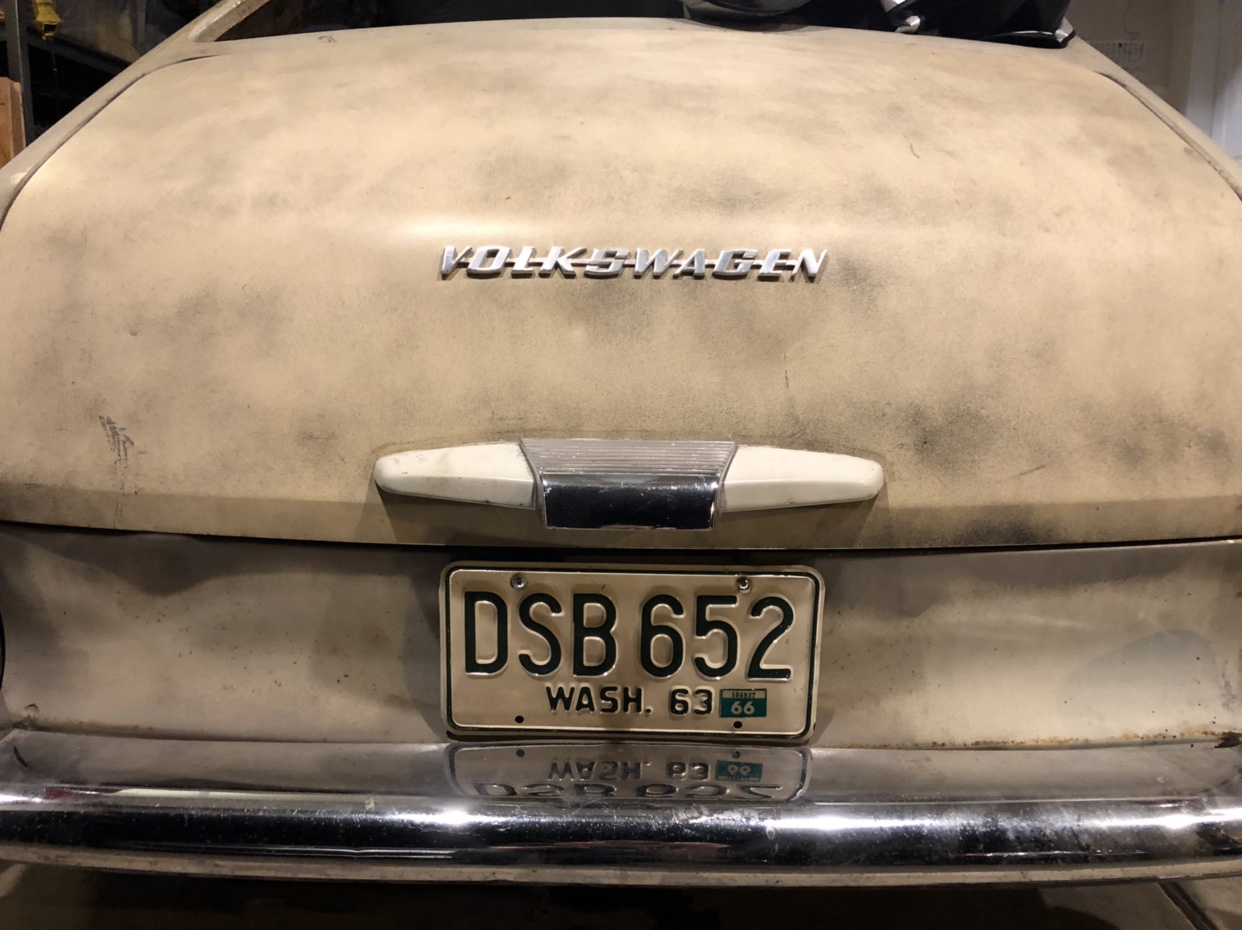 Tiguan and an Audi A6.

I left VWs to play with Vintage trailers and RVs for the past 10 years or so, now I’m back with my EA 73 914 1.7 powered 1966 Pearl White Fastback. The car has great bones, it’s a project for sure, and I’m loving every second of the build. Eventually, I’ll get my 11 year-old out in the garage, but being in the PNW, it’s a bit cold yet.
Top

Like many of you and millions of others my first car was a VW. '64 bug with a shattered piston (it still ran!) that I re-built in HS auto shop and sold for a 400% percent profit. Granted I bought it for $100 and sold for $400, but still... if only I could pull those margins today... BTW, this was all in the mid '70's. So , then had a ''67 Karman Ghia (really wish I still had that car), and then 20 or so years ago I sold that and got what I really wanted - a 911 Targa. Still have it. Wish I'd bought 2. Paid $5k for it. Interestingly (to me at least) my time spent working in a Honda motorcycle shop (also in the '70's) was the perfect primer for 911 engines. OHC, chain driven cams, same chain ramps, same "elephants foot" adjustors, same rocker covers/shafts/layout as a 911, just different cylinder layout (vertical vs flat)... so, you wonder.... what's this guy doing here?
Short answer - I wanna go vintage racing.. I did the calculations on building my 911 into a race car (yah, the Targa isn't the best platform, but it's what I've got) and the cost of the engine build alone (well over $25k) brought that fantasy to an end. So, I began casting about for an alternative and found a sort of well built 914 with a Type 4 engine, side shift 901 trans and an assortment of race goodies for less than half (way less) of the cost of building a 911. It was built roughly 15 years ago and has been mostly garaged for the last 5. Overall a great assortment of parts, but some decay and "put away wet" issues are being sorted one by one.
Engine and trans were built by Allen Johnsen in CO to stout but not radical specs. Guestimate is it should pull on the order of 150 hp. I've spoken with him (super nice guy), but since I haven't done any business directly with him (yet) I'd like to get as much intel on type 4's as possible before I go pestering anyone with rookie questions.
So there you have it. Pics below. I'll run it as is this season, but will probably pull the engine and do a re-seal, clutch and other maintenance things this winter. Once I finish culling through the receipts and build sheets I'll have a better idea of what I'm working with - in short It's a 2.0, Euro pistons, wedged crank, dual spring heads (ported and bigger too) balanced and polished rods, rockers, etc., lightened flywheel, close ration gears, dual external oil coolers, Accusump, race headers,Downdraft electric fan, alternator driven from one of the half shafts, and a variety of other racer goodies. Film at 11.
Cheerio,
-C
PS, The wing is off (not vintage allowed) and the stickers are all coming off too. Re-styling will happen when the mechanicals are all sorted.

My name is Bryan. I have a 1972 Bay Window with blacked out Plexi Windows and a sweet green with flames paint theme. It has been sitting in storage for the last 12 years with head issues. It has a 1.7l with dual Weber 34s that I finally am ready and able to replace. I want to go up to a 2.0 FI setup. I live in Central Illinois. I'll be researching more about that swap here. Cheers!
Top

My name is JT in the West Tennessee area and recently acquired a 1974 bay window. I haven't checked for certain but I'm sure it has the 1800. My goal is to pull the 1800 and replace it with either a subbie or vw 1.8 G60 (that is still up in the air). I want to rebuild the 1800 and go slightly larger (2056 maybe?) Then convert it to upright cooling and put it in my 73 bug. The bug currently has a 1776 with Holley Sniper EFI. My plan is to put the sniper on the type 4 and enjoy a great streetable build.
Top

Hi there.
I have a 1974 westfalia I am restoring.
I am 43 years old and from Denmark.
Loads of questions Will follow as I am building My first engine for the old brick..it Will not be a race brick, but hopefully a workhorse.
Went with the 1911 96x66 p and c set. 1700 heads.. And a cam we cant really id. All exept from the p and c set All Came with the camper in boxes.
Kind regards Jesper
Top

Name is Kevin, Phx AZ is my home, been around vw bugs and rails most of my life. I recently acquired a rail that needs a little help. Mostly joined to gain some tips, tricks, and knowledge about what I assume is a type 4. Those I am not to familiar with. I am running into some problems with it that I will post on the appropriate thread, so be sure to pop on over and offer some insight if you would please. Much obliged! Oh, when I get off probation, I'll figger out how to post up some pics of what I'm working with.

My name is Lee, I live in the UK and I have always been an avid fan of V-Dubs ever since I was a child. I've have owed a few over the years, at present I have a 71 bug, albeit a shell (body off resto) at the moment, and also I presently own a Type 4. I will be the first one to admit that I rather under estimated the amount of work that the Type 4 needed and warranted to nurture this classic back onto the road, however we are nearly there. I do hope to gain some more insight and assistance to aid the long journey of both my current resto's as they progress and I would greatly appreciate any help that members are willing to give from the wealth of skills, knowledge and experience that exists of this forum.

Hello, I’m Aiden, 16 years old with a bit of a VW addiction lol. I buy and sell a lot of VW parts and work odd jobs. I have a 64 bug which I’m almost done fixing up and will be selling soon. An OG 70 Squareback that’s a bit rough around the edges and a cheap, great driver. And newly a 72 Bay window Westfalia tin top and I will be looking for some T4 advice soon. I have a 71 411 and a ~73 412 motors that I pulled from a semi local VW junkyard and I’m going to rebuild one of them for my bus. I will be looking for some advice on that soon.
Top

My name is Pat and let's just say I was a VW mechanic when there were no water cooled VWs. My first rides had only 2 wheels, but when I was finally old enough for a license, I would drive my Mother's '62 Type 1 Deluxe (I think that's what it was called then). That was just fine until in that first summer, I took it to a "skill test", or gymkhana as they were called then and did fairly well. Let's just say by the end of the summer the bug wasn't exactly stock any more, but since there was literally no aftermarket in North America, I had to devise and build all mods myself. Then I bought a '66 Ghia, and it became my subject of a lot of suspension and engine mods - ending up with a 1500 S/TS based engine with Type III cooling and rear mount. From there, fixing and modifying lots of other people's cars, getting invited to work for local dealer, then years in all parts of the business in virtually every position. Also decades building car, bike, airboat and even the odd airplane engine. But, a very long time ago, I started working on water pumpers and a bit after that, diesel engines - and pretty much walked away from the air cooled business and hobby altogether. Gave all of my tools, parts, inventory to my business partner (who is still doing air cooled restos and mods several decades later) and concentrated on other stuff including raising kids and building business.

Well, kids are grown up, but their old man really hasn't. I am going to build a Type IV engine/901 gearbox for his upcoming 356 Speedster "replica" and need to come from outer space into the inner space of the Type 2/4 world. Sadly, I recently gave up my wife's first car ('71 411) due to rust and room.
Top

My name is Greg. I have a decent 914 shell, a really bad parts car, and an old 914 race car. All were put up wet and ignored for 20 years while life happened. I have two 2.0 914 complete engines, one with Weber’s, one with fuel injection. Both are on the bench and neither turn over. I also have a complete 1.8 with fuel injection in the parts car. Way back when I had a 72 Bus that somebody stuck a type 4 in. Got a mofoco rebuilt, never could got the exhaust to seal, put about 100k on it.

Looking for info on what to do with these, do they have value, can they be rebuilt, etc.
Top

Hello- My name is Mike. I'm new here. I was looking on this site for Type 4 conversions for my 912. I'm looking for any advice and pictures you might have. I recently picked up a complete 912E engine, so I have that to work with. I don't really want to weld receiving mounts on the frame rails. Are there any other options while still using the 912E cooling tin?

Heyooo, Rich here, new member. Attached is a pic of my 912E, love the T4 motor and look forward to learning via this site cheers.
You do not have the required permissions to view the files attached to this post.
Top
Post Reply
569 posts

Return to “The Type 4rum”