SCOTTRODS wrote: ↑
Sun Jul 10, 2022 3:16 pm
I'm a "Down and Aft" guy too, Lee... I thought I was the only one that noticed stuff like that. I am reluctant to tell anyone they could do something "better" on the forums most times, as they often have an access issue that requires the upside down nature of them... As far as Locking washers - Nothing beats NORDLOCK... look them up and see if you can't find a video on them. There just isn't a better locking solution for nuts and bolts, without thread locker from hell... I used to do some work that required them and thread locker due to extreme vibration... VW's seem like an ultimate application of the two.


Ol'fogasaurus wrote: ↑
Fri Jul 08, 2022 7:56 pm
Slayer, a rule of thumb is that the nut goes on the underside not the head of the bolt, that way if things get loose the bolt does not be the part to drop away but should stay in place to somewhat hold things together... a rocky clamping setup maybe but should still be there.

I checked others work in engineering and, while not often, the nut did get on top. If so then double nut it to lock it in place. Locking nuts are usually thinner than the regular nuts as they are not the working part of the "clamping together of things" being done.

For what it is worth.

There are so many styles and designs for bolts, nuts and washers. I worked with the Military, Federal, National Aerospace Standards and International Specifications Office (mostly Metric) (its been a long time so I am not positive if the "Office" is the right word and that is not all of the Standards specs out there either). I've been retired now almost 22 years so things have changed somewhat too but not some things I am pretty sure of that) and probably on almost a daily basis. I drew drawings of new fasteners some of which became not only as company parts but some also became spec parts also (I don't think ISO though).

I don't know about the different companies whether they are good or not so good but if they are saying they meet the above standards, not just their own standards (they could go above the standards also I guess but that is not always good either) then they should be OK. I have seen some start good but then go down hill also.

You might be surprised on just how many types, styles and shapes of washers that are in the standards as well as nuts and bolts. They are often designed to meet non-normal needs also (e.g., riding radiuses, tapered shapes, off-set holes, etc.).

Washers also have a limit of three being stacked as spacers. This is because the washers can move/offset during clamping or for other reasons which cause the bolt head or nut contact area to not get the amount of contact translation (distribution) they were designed for. A single spacer replaces the stack then.

Remember that most fasteners have a use cycle (on and off clamping is a cycle) limitations such as on and off clamping, age changes, wear and basic design changes that can limit to as low as one clamping and then replace the unit(s). We all have a tendency to over-do mostly cause we don't know that there are in the basic design of the fastener and or assy.

Probably more than you wanted to know.

Guys, thanks for the input. Much appreciated and will keep it in mind.

As much as I love my wife, she's not a very good helper in the garage when trying to stab a motor!

We tried for close to 3 hours to do a job that should take 5 minutes with no love. A quick phone call to another VW guy (thanks Vince) & we had the new engine in in 5 minutes! 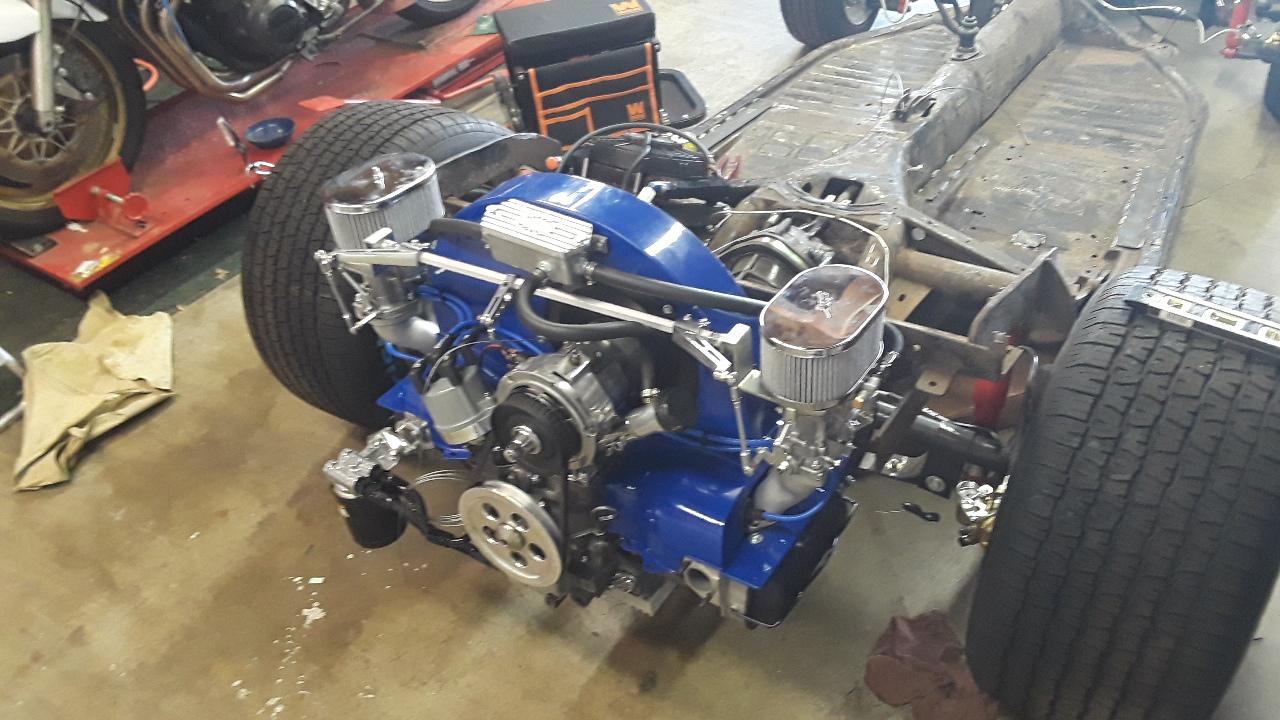 I used to stab 'em by myself in 3-5... I usually kept my Breaker bar and socket handy to turn the engine and never installed one with plugs in it... Makes it easy to turn the engine to match up the splines from tranny to clutch... other than that It's not too hard to keep cables and hoses out of the seam between engine and trans. If mine were all open without a body like that, it'd been even easier... (I also have a specific platform that I set motors on to lift them into place that is a big help... has swivel in the middle to allow the engine to tilt in all directions as well. It's out on loan right now or I'd show you a picture...
I have found them completely missing more than once. - PILEDRIVER

Some pics of My Powder Coating work
http://s244.photobucket.com/albums/gg6/terrellster/
My Facebook Page for Powder Coating
http://www.facebook.com/profile.php?id=100001788886297
Top

Your pix with the drive train installed does look pretty good. It would look nicer if you chromed the pan too!

You might be interested in just how many washer designs there really are out there just in the MIL or ISO specs alone. Add to that companies own designs that may or may not meet with other companies/industries, MIL pr ISO specs or international specs. I don't know how many there are, but I have run into some real cheezie products before.

Lock washers have their place in design but so do others. Also, the age of the used washer (especially split washers as too long clamped they can lose their locking abilities when they become flattened and stay that way) is important to know. Split washers should not be used as stacked washer spacers also and for several reasons.

Going through the books just to see what is out there can be a very long and tiring tiring process.

So a couple of days ago I stopped by my local (old school) VW shop for a few items I was still missing...(Thanks a bunch Jim!)

Jim was able to provide me with a couple of missing OEM type items including:
A (neused and tested good) Bosch starter 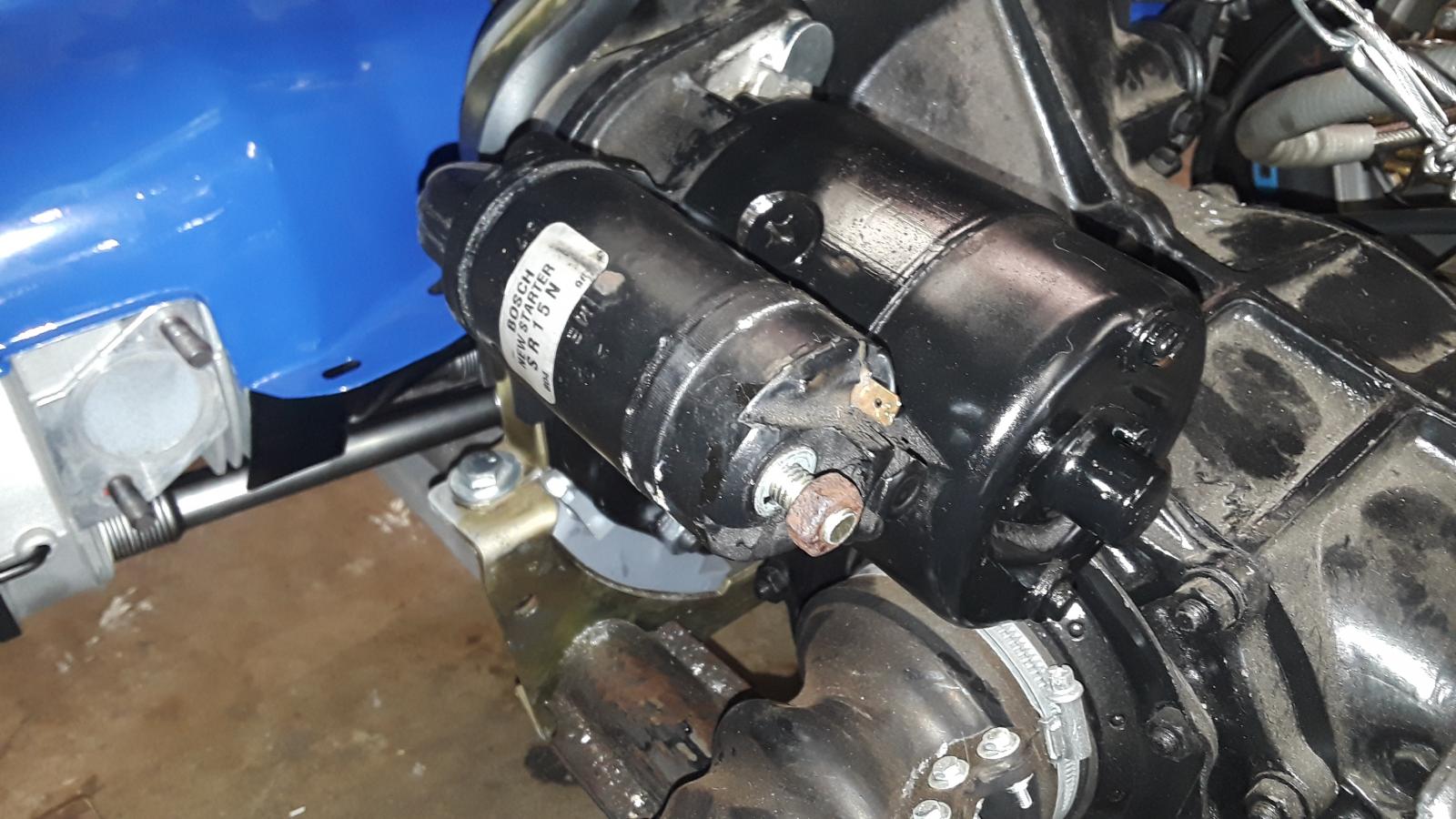 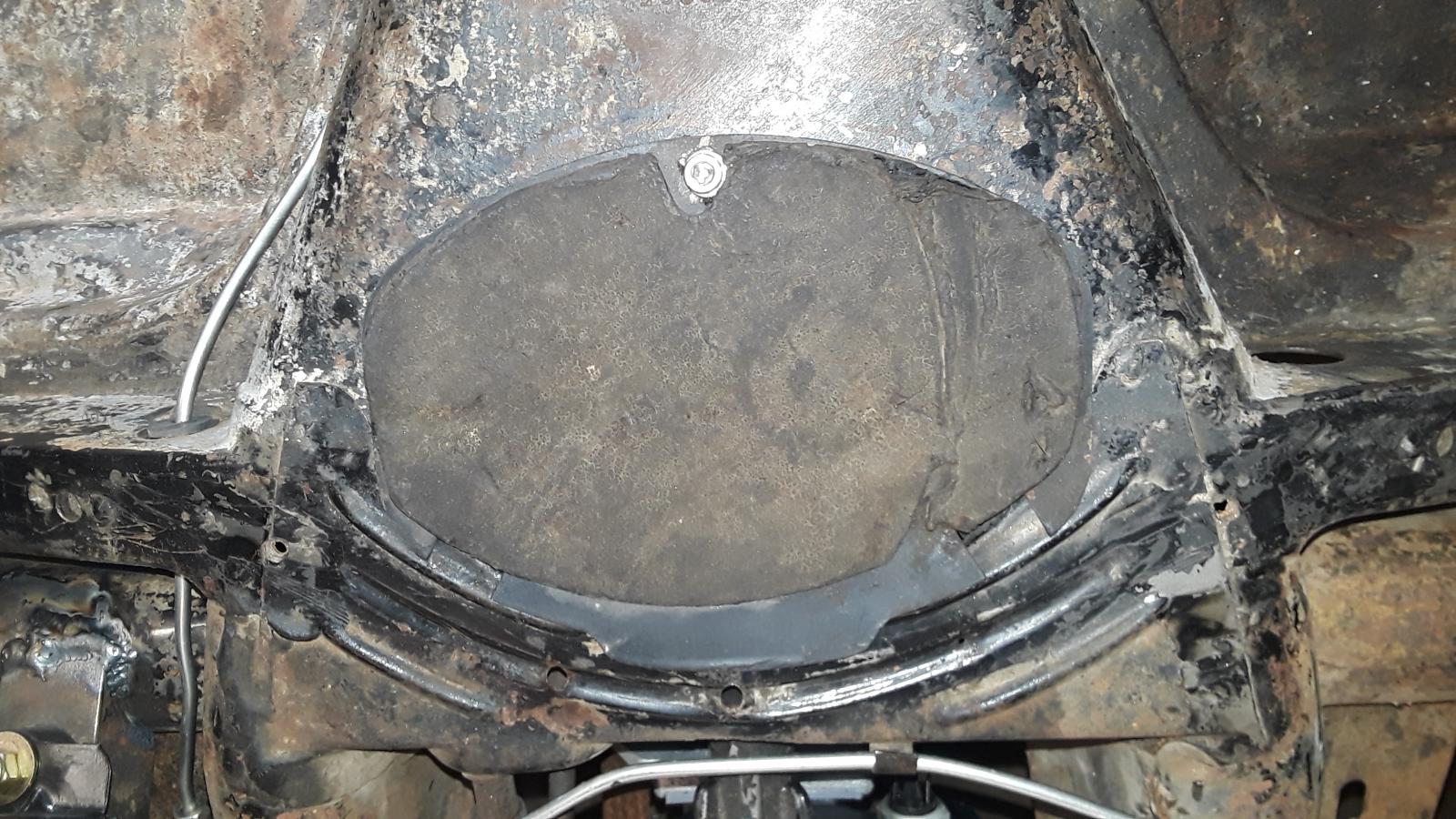 And the front tunnel cover 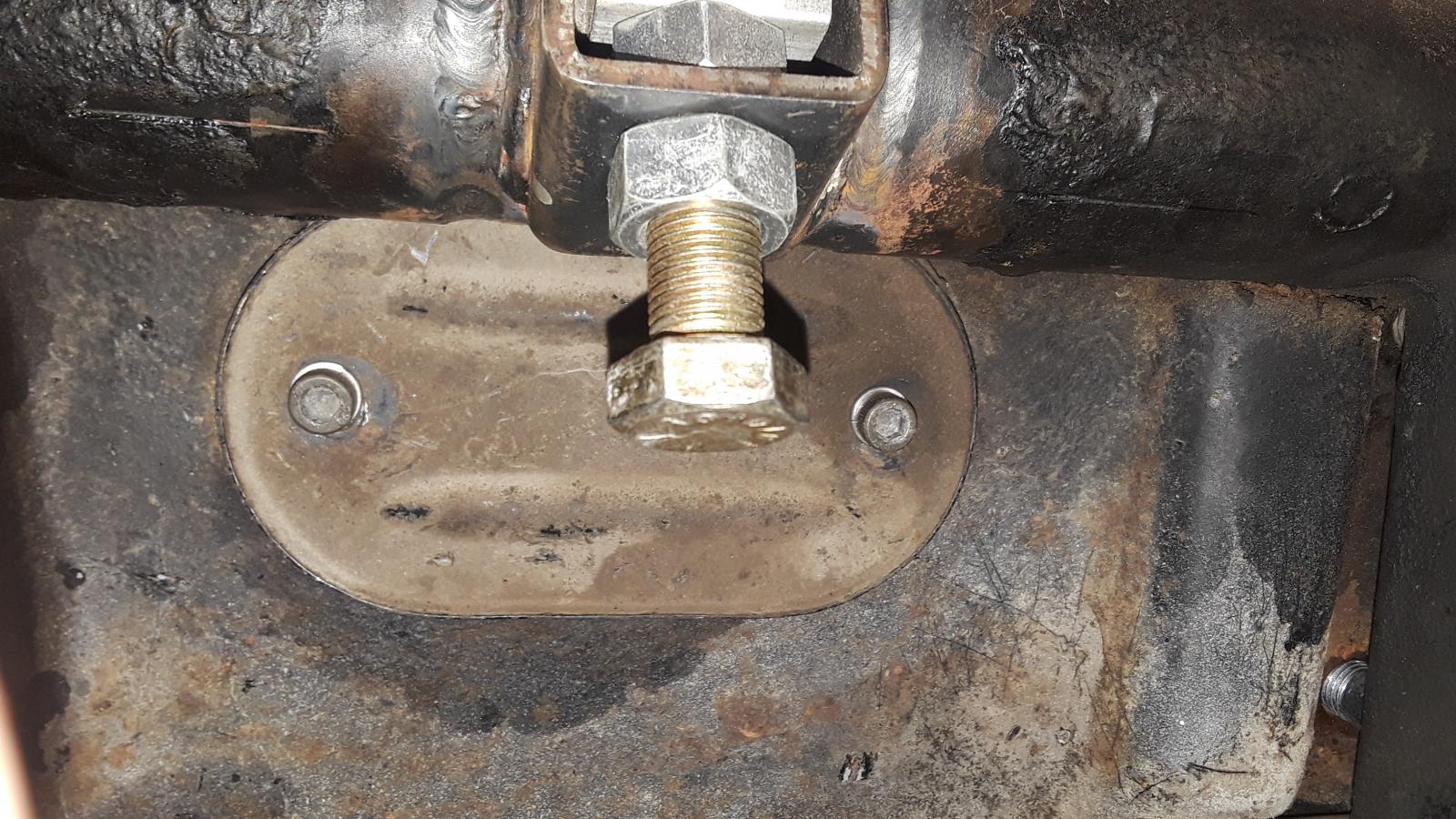 Purists may piss-off that I chose to use NON-OEM hardware...!

OEM braided jumper from trans mount to trans. It has a small hole on the top & a large hole on the bottom and is EXACTLY the right length! 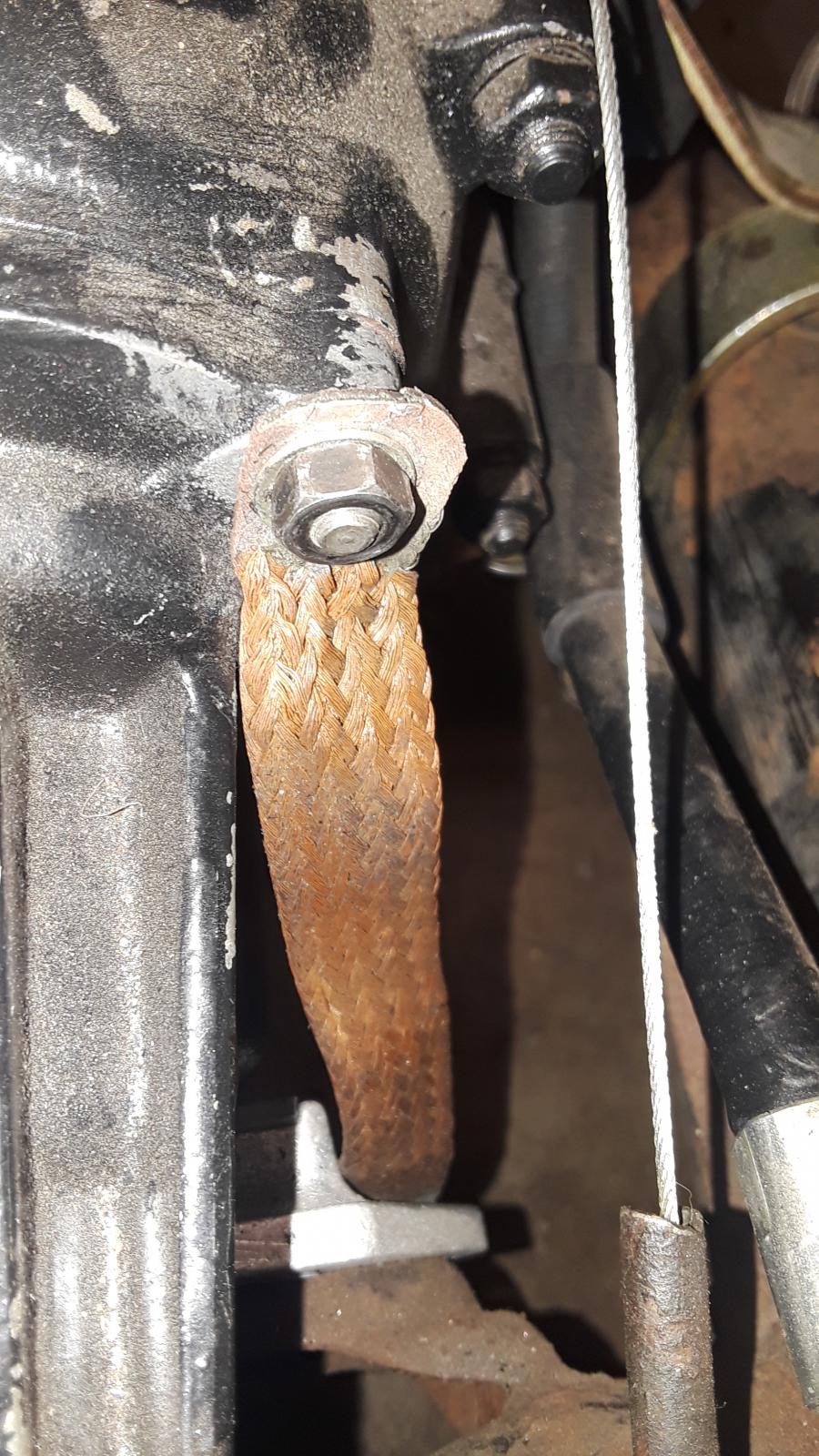 Also, because the EMPI clutch cable shortening is a complete POS and only serves to eat the cable, the hardware store & a collection of honyock fittings were sourced to make the connection 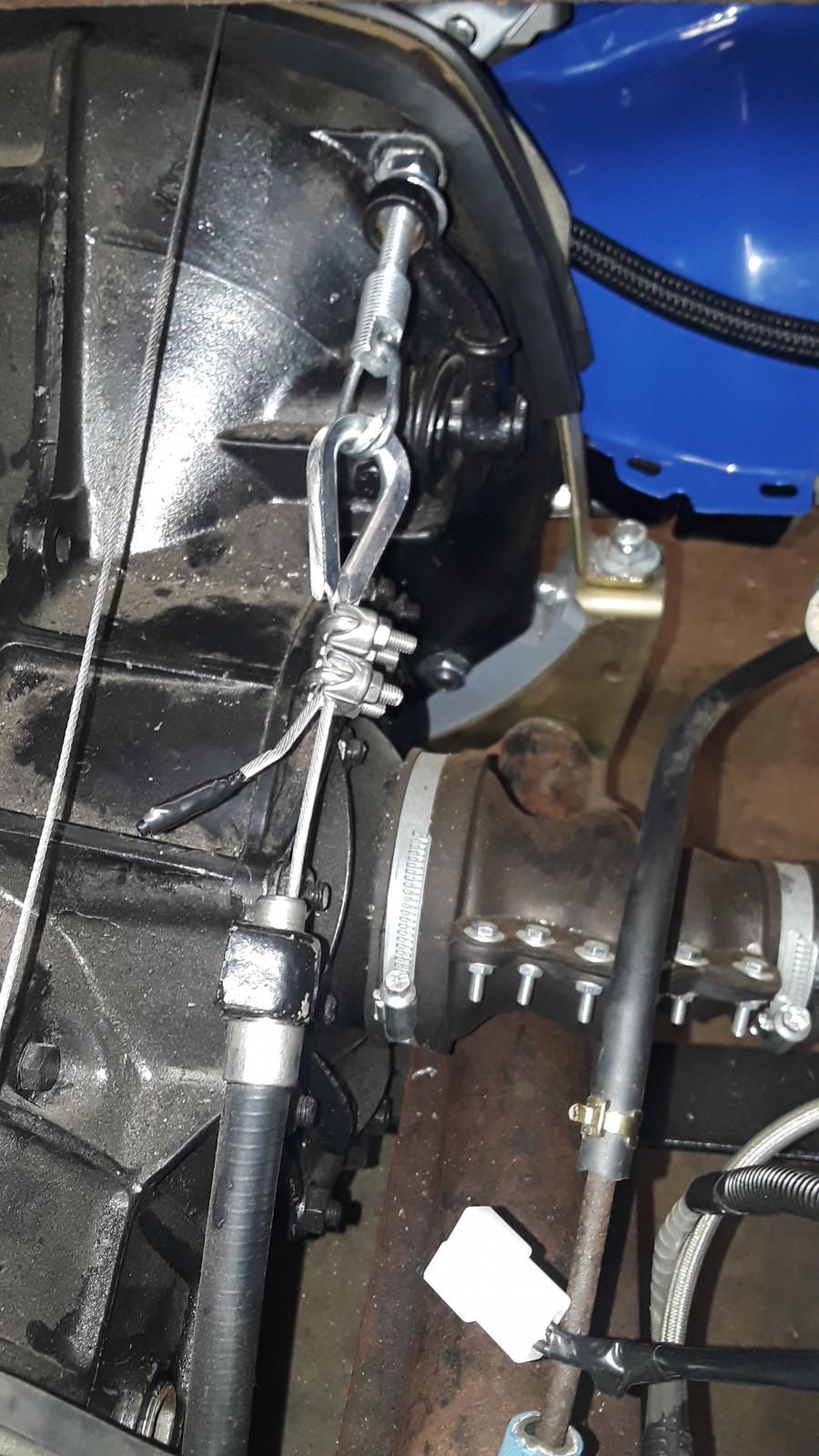 The oil cooler was mounted for the last time... 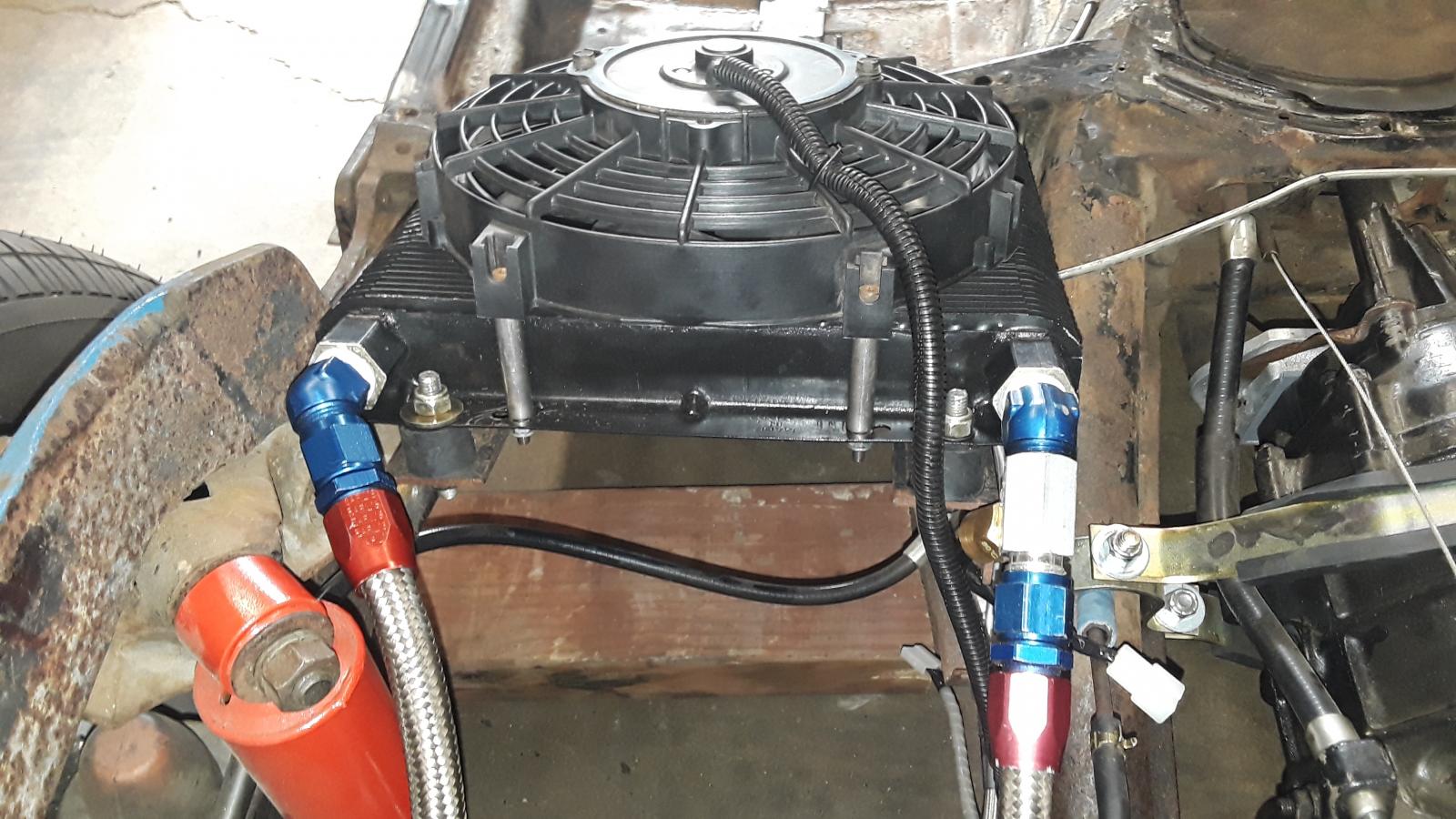 Including the temp switch 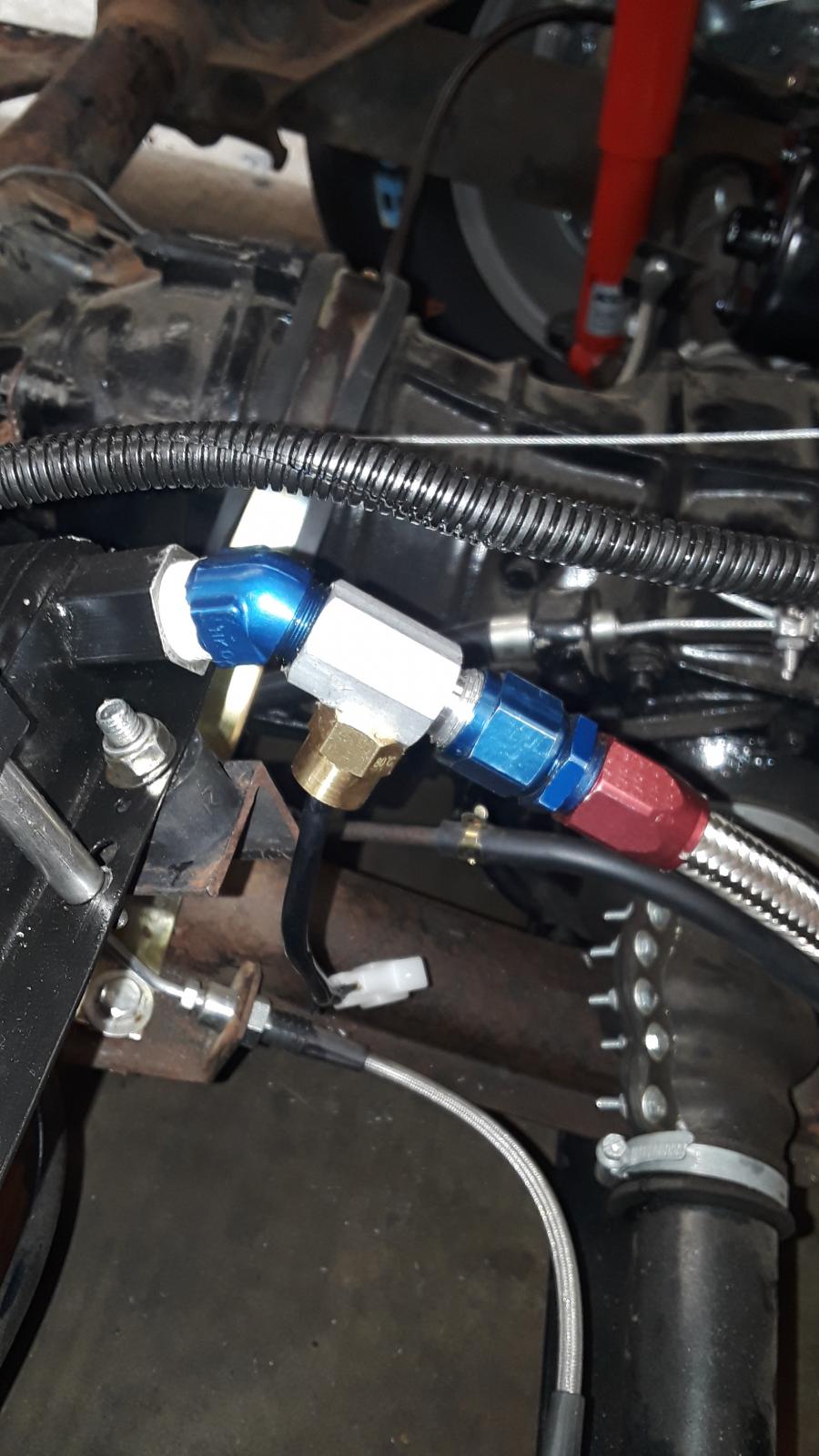 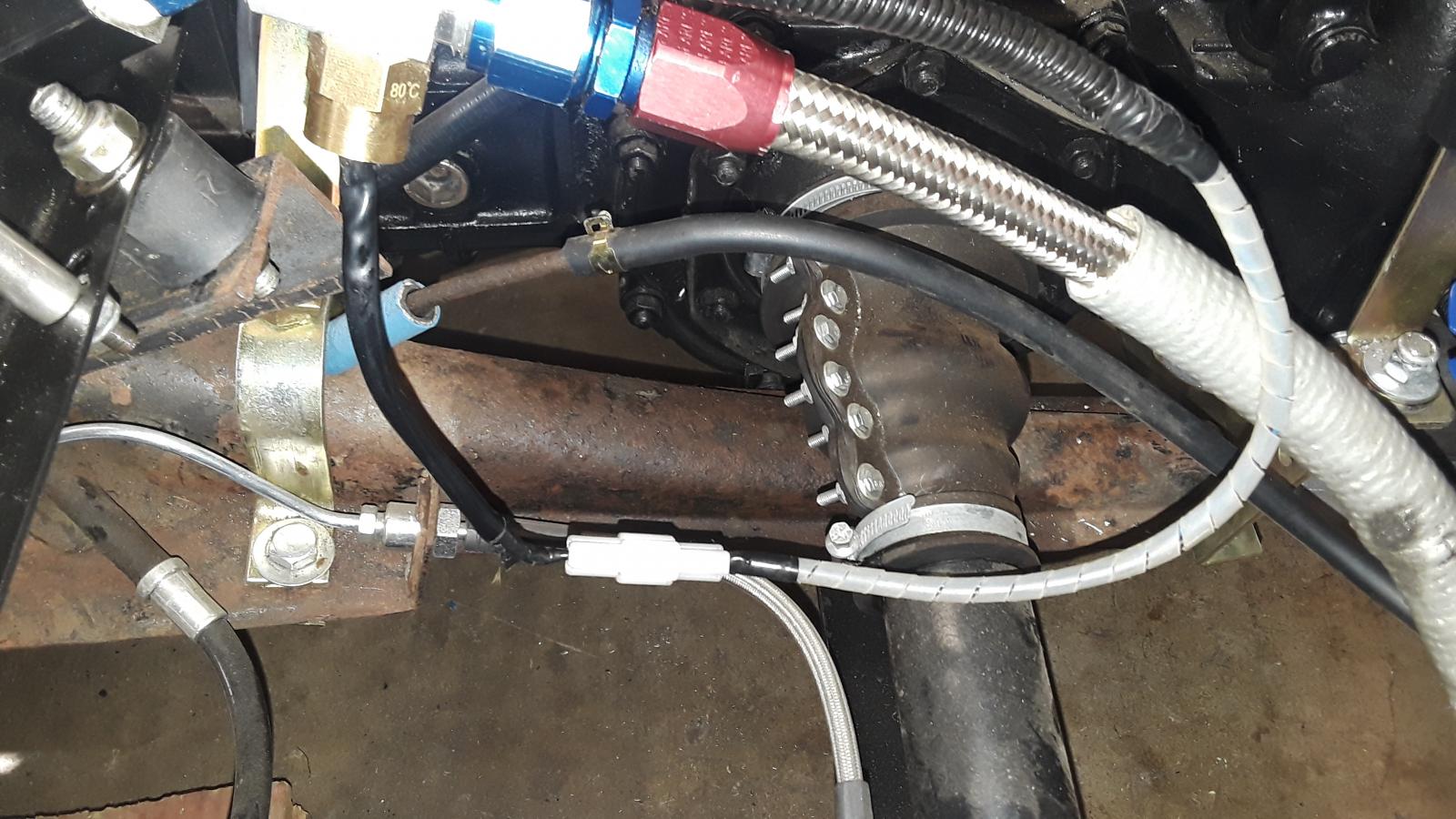 A second set of caster bushes were added for "high speed" stability, along with the necessary longer bottom bolts 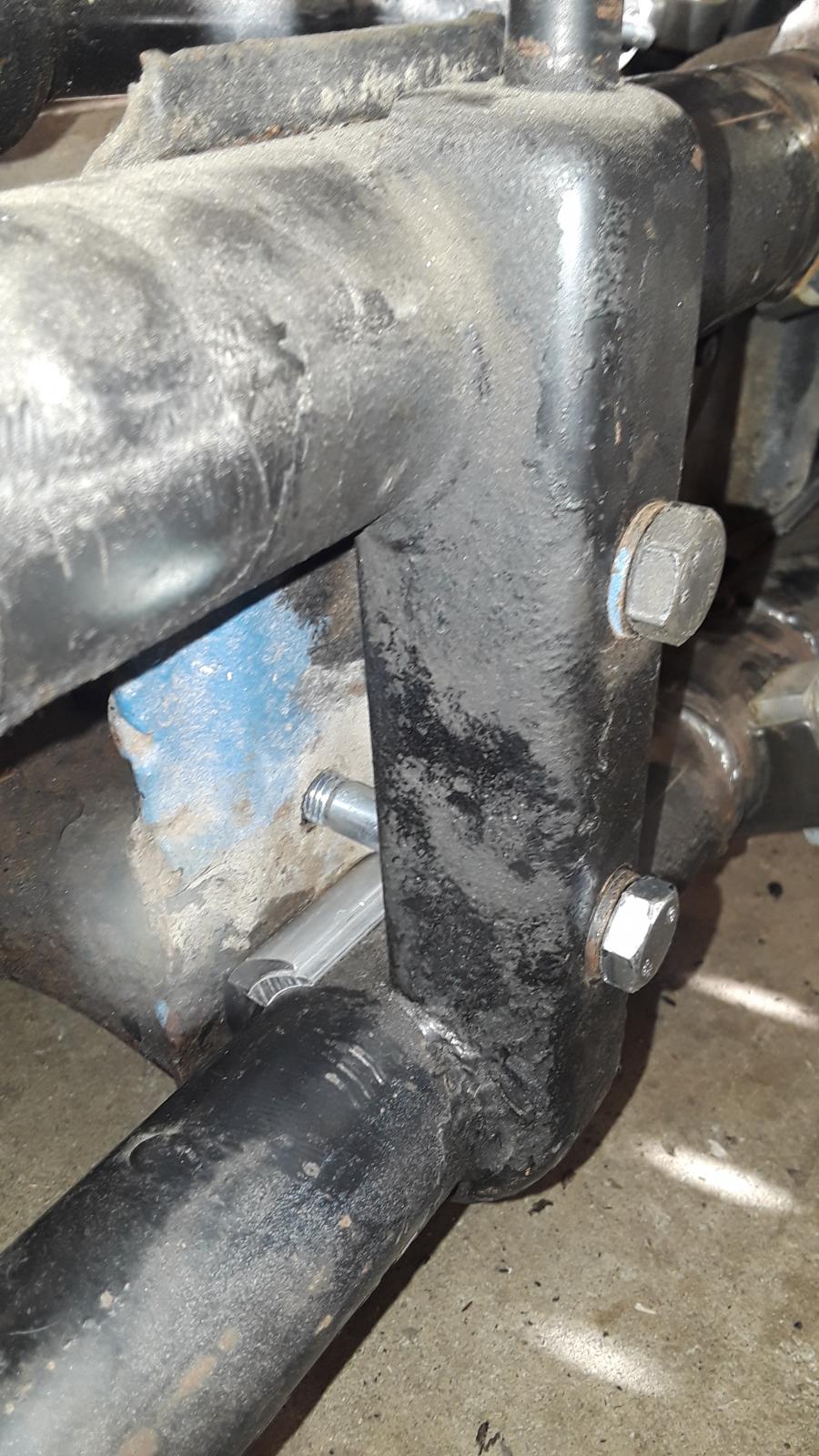 At the end of the day, I dropped the body back on and... TA DA! the cooler fan hits the body and was promptly removed, leaving an un-fanned oil cooler 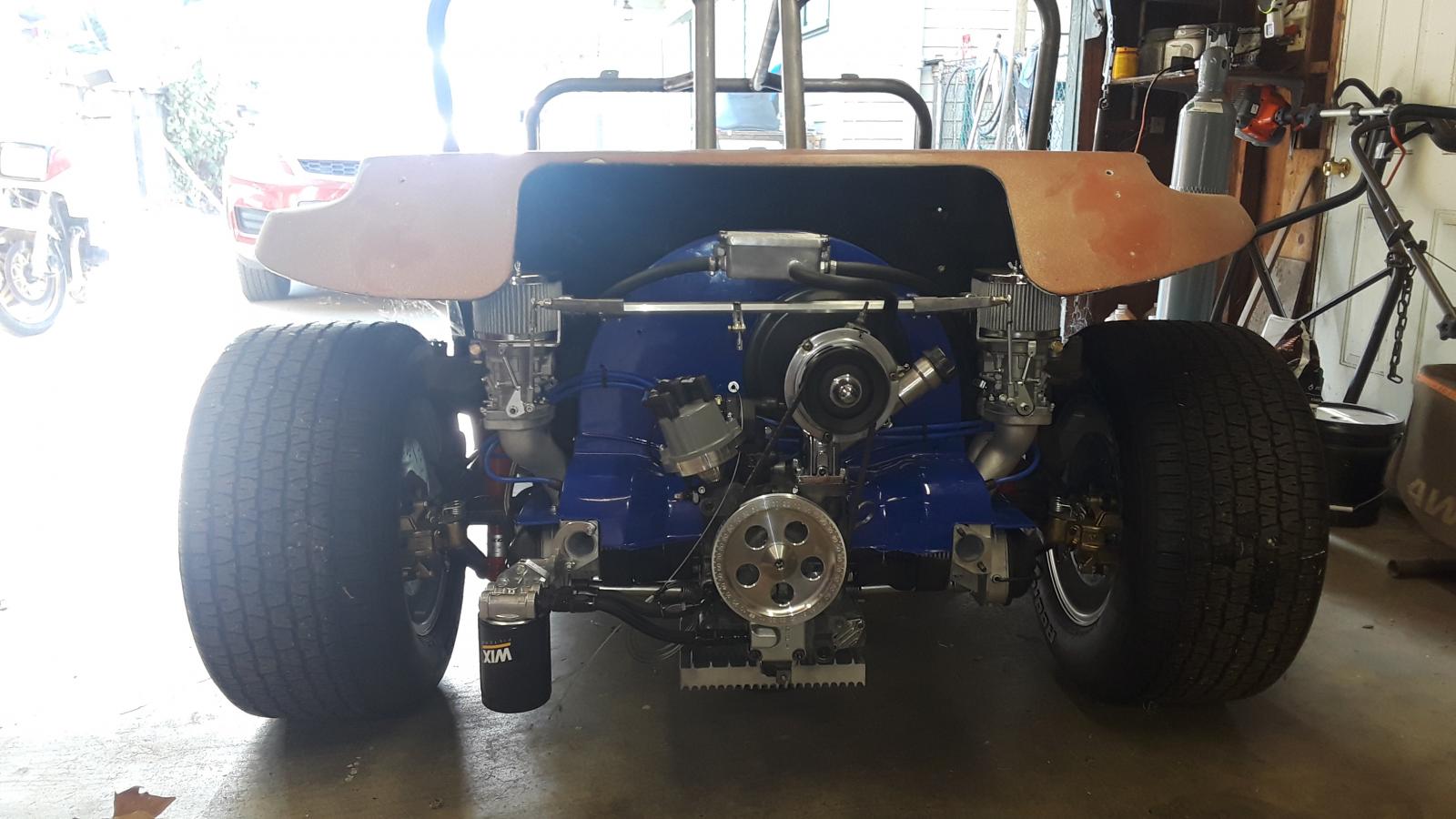 Slayer, on the pix with the spacers that bolt is not designed for that kind of loading and could fail on you.

Threads are for clamping things together and the shank (the unthreaded part) is what is supposed to take the loading including directional (and that depends on the basic design e.g., material and temper) of the bolt) loading. The bottom cup shaped spacer looks to have only a small contact strip which could cause problems... it needs to have a wider contact point and the fastener needs a longer shank.

PS; There are roughly two ways to make threads:

One is to cut them like you would using a tap and die setup. What happens here is the grain of the bolt, in the thread area, is cut away leaving the threads less strong as the other style of forming threads.

The other way is to have them formed b having the threads rolled which means the grain of the bolt's material is compacted making them stronger than the cut threads.

I have drawn up the plans for 9 bolts as I remember of which 5 of them became MIL standards. I am not sure of the others as to if they remained a company standard or also became some kind of standard also.

I hope this is clear.

Return to “The VW KitCar Forum.”